The metamorphosis it is an irreversible transformation, a phenomenon that occurs in the nature of certain animals. We see it in some animals like dragon-fly, the butterfly and the frogs.

This concept has been taken over by the creations of different cultures. For example, the mythology and legends of cultures as far away as Greek antiquity and pre-Columbian American peoples, which narrate the transformation of human beings or gods into animals or plants.

Normally, animals suffer structural changes and physiological during embryonic development. But what makes animals that undergo metamorphosis different is that they change after birth.

These changes are different from those that occur due to growth (change in size and increase in cells), since in these, the change occurs at the cellular level. These drastic changes in the physiognomy they usually also imply a change in the habitat and in the behavior of the species.

The metamorphosis can be: 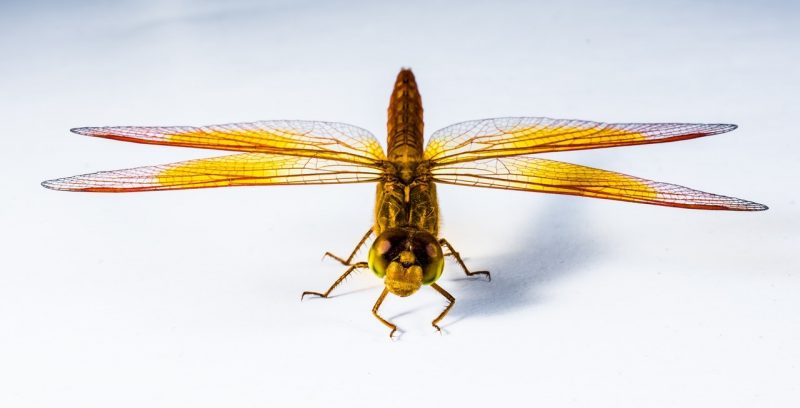 Flying arthropods, which have two pairs of transparent wings. They hatch from eggs that are laid by the female near water or in an aquatic environment. When they hatch from the eggs, dragonflies are nymphs, meaning that they are similar to adults but with small appendages instead of wings, and without mature gonads (reproductive organs).

They feed on mosquito larvae and live underwater. They breathe for gills. The larval stage can last between two months and five years, depending on the species. When metamorphosis occurs, the dragonfly comes out of the water and begins to breathe from the air. It loses its skin, allowing the wings to move. It feeds on flies and mosquitoes.

When hatching from the egg, the jellyfish are polyps, that is, stems with a ring of tentacles. However, due to the accumulation of a protein during winter, polyps turn into adult jellyfish in spring. The accumulated protein causes the secretion of a hormone that makes the jellyfish become an adult.

It is an insect with short antennae, herbivorous. The adult has strong hind legs that allow it to jump. In a similar way to dragonflies, the grasshopper hatches into a nymph, but in this case they closely resemble adults. 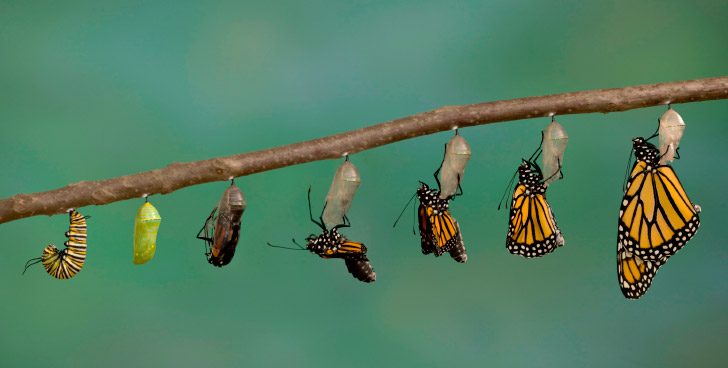 When it hatches from the egg, the butterfly is in the form of a larva, called caterpillar, and feeds on plants. The head of the caterpillars has two small antennae and six pairs of eyes. The mouth is not only used for eating, but also there are the glands that produce silk, which will later be used to form a cocoon.

Also read:  10 Examples from Liquids to Gaseous (and the other way around)

Each species has a specific duration of the larval stage, which in turn is modified by temperature. The pupal stage in the butterfly is called the chrysalis. The chrysalis remains immobile, while the tissues are modified and reorganized: the silk glands become salivary glands, the mouth becomes a proboscis, the legs grow, and other significant changes.

This state lasts approximately three weeks. When the butterfly is already formed, the cuticle of the chrysalis becomes thinner, until the butterfly breaks it and emerges. You must wait an hour or two for the wings to become stiff to fly. 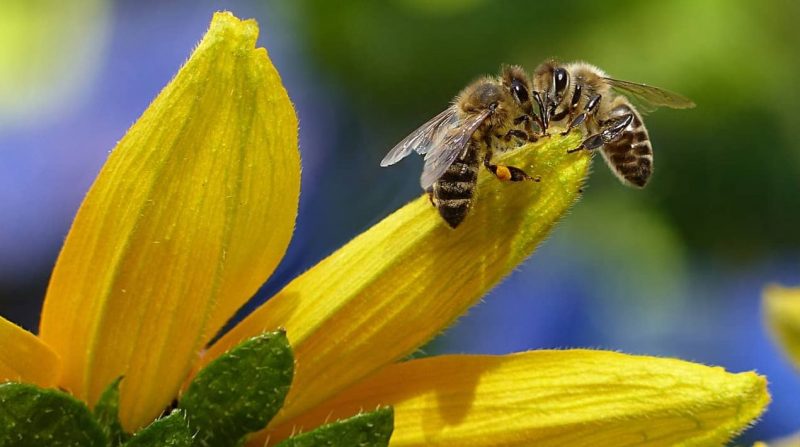 The larvae of the bee hatch from an elongated white egg and remain in the cell where the egg was deposited. The larva is also white and during the first two days it feeds on royal jelly thanks to the nurse bees. It then continues to feed on a specific jelly, depending on whether it is a queen bee or a worker bee.

The cell where it is found is covered on the ninth day after hatching. During the prepupa and the pupa, inside the cell, begin to appear the legs, the antennae, the wings, the thorax, the abdomen and the eyes develop. Its color changes gradually until it becomes an adult. The period in which the bee remains in the cell is between 8 days (queen) and 15 days (drone). This difference is due to the difference in feeding. 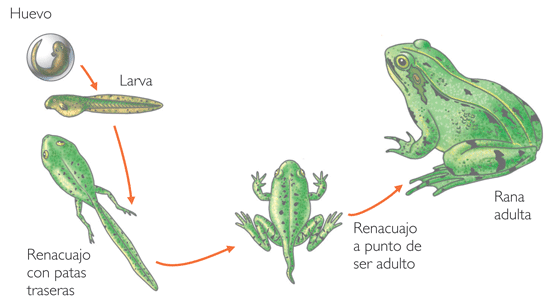 Frogs are amphibians, that is, they live both on land and in water. However, during the stages leading up to the end of metamorphosis, they live in water. The larvae that hatch from the eggs (deposited in the water) are called tadpoles and are similar to a fish. They swim and breathe underwater, since they have gills. The tadpoles increase in size until the moment of metamorphosis arrives.

During it, the gills are lost and the structure of the skin changes, allowing cutaneous respiration. They also lose their tail. They get new organs and limbs, such as the legs (hind legs first, then forelegs) and dermoid glands. The skull, which was made of cartilage, becomes bony. Once the metamorphosis is complete, the frog can continue swimming, but it can also stay on land, although always in humid places.