They are known as liquids to those products and substances that occur in that state of matter. There are three possible states of matter: solid, liquid, and gaseous (and plasma is currently defined as the fourth state of matter). These states are differentiated by the degree of cohesion presented by the molecules that compose it. For instance: water, oil, glycerin.

At liquid state the attractive forces between molecules are weaker than in solids but stronger than in gases. The molecules move and collide with each other, vibrating and sliding past each other.

In liquids, number of particles per unit volume is very high, so that collisions and frictions between particles are very frequent. Whether a substance is in a liquid, solid or gaseous state basically depends on the temperature and its vapor pressure. In temperate regions of the world, water, for example, occurs in a liquid state.

In liquids, molecules can move and collide with each other, that is, they stay relatively close. As the temperature of a liquid increases, the momentum of its individual molecules also increases.

Consequently, liquids can flow to take the shape of your container container, but they cannot be easily compressed because the molecules are already tightly bound. That is why liquids do not have a fixed shape, but they do have a defined volume. Liquids are subject to expansion and contraction processes depending on the temperature and pressure applied to them. 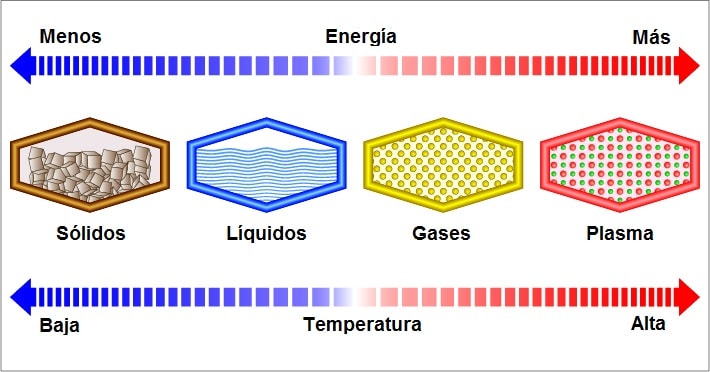 The properties of liquids

Among the main characteristics of liquid substances, it is worth mentioning the boiling point, that is, the temperature at which it boils and becomes a gaseous state. This is given by the vapor pressure, which equals that of the medium that surrounds the liquid.

Other typical properties of liquids are:

Examples of liquid substances at 25 ° C are: