With the name of River It is known to the natural currents of continuous water that flow into other similar ones, called seas: the rivers are tributaries of the seas, which in turn constitute the inflow of the oceans, the aquatic surfaces that constitute 71% of the terrestrial surface.

The world is full of rivers and most countries have several of them, including those countries that have no outlet to the sea, the so-called landlocked states.

All rivers have a structure characteristic that is their own. The origin of the river is located in the part called nascent, which is continued by the course, the distance between the source and the mouth.

In the upper course you can see the steepest slope and a very rapid movement of the waters, with erosion in a vertical direction. The upper courses are, in the case of being dry, the ravines. In the middle and lower reaches the slope is gentler, the transport continues and the erosion becomes horizontal, widening the Valley. The channel it is the cavity through which the water runs, and the mouth is the space through which the river pours its waters.

The hydrographic framework of the rivers makes it necessary to establish a consensus to determine which is the river and which is the tributaries and subafluents, water currents that provide a flow to the river without being the main one. It is usually defined by main river as the largest flow of water, or with its greater length or drainage area.

Sometimes the size and the flow of the rivers is similar to that of the tributaries, or the condition of greater flow is modified according to the time of year. This is why it is common for the same rivers to be named in many ways, or the major tributaries to be named in different ways.

Also read:  Causes and Consequences of the Independence of Mexico 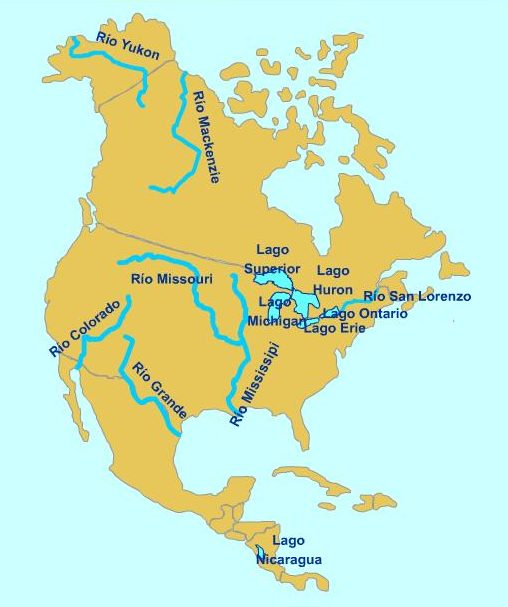 The geography of North America it is home to a large number of rivers, many of them associated with the great Mississippi-Missouri-Ohio basin, which occupies almost 6000 kilometers. It is a region rich in lakes, particularly glacial in origin, which occupy much of Canada. The following list will show some examples of rivers in North America, with a brief description of the most important of them: