The alkynes or acetylenic hydrocarbons They are hydrocarbons that are characterized by having a carbon-carbon triple bond.

Non-cyclic alkynes respond to the molecular formula CnH2n-2, where n represents the number of carbon atoms.

They have a degree of unsaturation even higher than that of alkenes (hydrocarbons formed by at least one carbon-carbon double bond). For instance: ethyne, propyne, 2-butyne, 3-octyne.

The simplest alkyne and one of the most used in everyday life and in the industrial field is the ethyne or acetylene. Ethine is a highly flammable gas that produces a large flame at a very high temperature, which makes it a useful substance in many processes and is characterized by its efficiency. It is used in the welding process, to manufacture lighting fixtures and for cutting materials. Other alkyne gases, such as propyne and 1-butyne, are also used in welding and cutting procedures.

Many alkynes are used in intermediate stages within the material production process like PVC, polyethylene, artificial rubber, neoprene and other plastics. Others are used in the production of solvents and as additives for fuels, paints and coatings.

Alkynes are also present in the pharmaceutical industry, are used for the production of cytostatic drugs (which are used in cancer treatments) and other medicines such as contraceptives.

Diagrams of the chemical compounds of these alkynes: 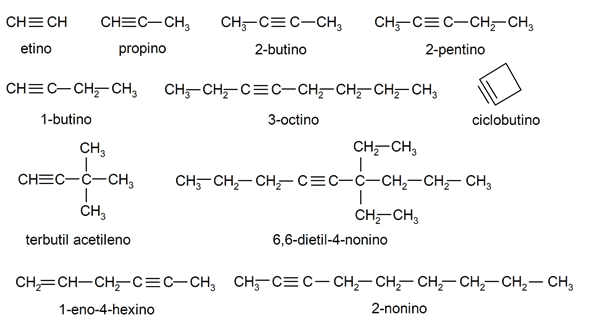