According to the physical principles of thermodynamicsIt is notable that temperature is something that is not constant in bodies, but rather is transferred from one to another: the direction is always the same, since the heat passes from objects with a higher temperature to those with a lower one.

There are many mathematical formulas corresponding to physics and chemistry that tend to explain these heat transfer processes, but the main thing is that they occur under three different procedures: conduction, convection and radiation. 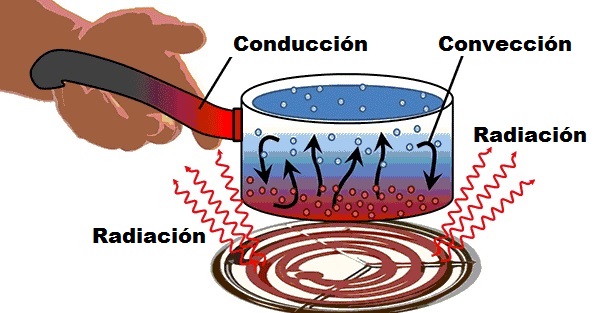 The driving It is the process from which heat spreads due to the thermal agitation of the molecules, without there being a real displacement of them. It is a very simple process to understand and at the same time ‘invisible’ as only heat transfer occurs, with nothing physical visible.

Conduction is the reason why objects, in a more or less prolonged time, end up acquiring the same temperature throughout. Some driving examples:

The convection It is the transmission of heat based on the real movement of the molecules of a substance: a fluid that can be a gas or liquid intervenes here.

The convective heat transmission It can only be produced in fluids in which by natural movement (the fluid extracts heat from the hot zone and changes densities) or forced circulation (the fluid moves through a fan), the particles can move transporting the heat without interrupting the physical continuity of the body. Here a series of convection examples:

The radiation It is the heat emitted by a body due to its temperature, in a process that lacks contact between the bodies or intermediate fluids that transport heat.

Radiation causes a solid or liquid body with a higher temperature than another to immediately produce a heat transfer from one to the other. The phenomenon is that of electromagnetic wave transmission, emanated by bodies at a temperature higher than absolute zero: the higher the temperature, then the higher these waves will be.

This is what explains that radiation can only occur as long as bodies are at a particularly high temperature. Here is a group of examples where radiation occurs:

The heat transfer processes increase and decrease the temperatures of the affected bodies, but also sometimes (as exemplified with ice) are responsible for the phase change phenomena, such as the boiling of water into steam, or the melting of water into ice. Engineering concentrates many of its efforts on taking advantage of this possibility of manipulating the state of bodies through the transmission of heat.