With the name of protein Molecules made up of amino acids are known, which are linked by a type of bond known as peptide bonds. For example: fibrin, elastin, actin, insulin.

Proteins make up about half of the dry weight of tissues (and the 20% of body weight of people), and there is no biological process that does not include them.

The composition of these molecules is carbon, hydrogen, oxygen and nitrogen. The order and arrangement of the amino acids within the protein depends on the genetic code of the person, that is, the DNA.

What function do they fulfill?

Proteins have a function that is essential for growth, and is mainly motivated by the nitrogen content that is not present in any of the other molecules that is incorporated through the diet: carbohydrates and fats.

Unlike these two, proteins do not have an energy reserve function, but they do have a fundamental role in the synthesis and maintenance of some tissues or components of the body such as gastric juices, hemoglobin, vitamins and some enzymes. In the same way, they help transport various gases within the blood, and function as shock absorbers.

Among the functions of proteins, on the other hand, are to provide essential essential amino acids for tissue synthesis, and also act as biological catalysts, accelerating the speed of chemical reactions of metabolism. Finally, it can be said that proteins act with a defense mechanism, since antibodies are natural defense proteins against infections or foreign agents.

Regarding the properties of proteins, it can be said that the stability It is the most important because proteins must be stable in the environment in which they are stored or in which they carry out their function, in such a way as to extend their life as long as possible avoiding the generation of setbacks in the organism.

On the other hand, proteins have a temperature and a pH to maintain to guarantee that stability, so it is said that the second fundamental property is that of solubility.

Some other minor properties such as specificity, pH buffering or electrolytic capacity are also typical of this class of molecules.

The most usual classification of proteins is made according to their chemical structure, among the simple proteins that only produce amino acids when hydrolyzed; albumins and globulins that are soluble in water and dilute solutions; glutelins and prolanins which are soluble in acids; albuminoids that are insoluble in water; the conjugated proteins containing non-protein parts and protein derivatives which are the product of hydrolysis.

The main source of protein in the body is the diet. The importance of including proteins in the diet has a special emphasis on growing children as well as on pregnant women, who need the production of new cells.

When people feed on fruits vegetables or meats They usually incorporate a large amount of protein through the process known as protein digestion, which consists in the decomposition of the product until it is transformed into simple amino acids, and then assemble them into proteins for the body, in the process called protein synthesis. Only after this are they incorporated into the body. 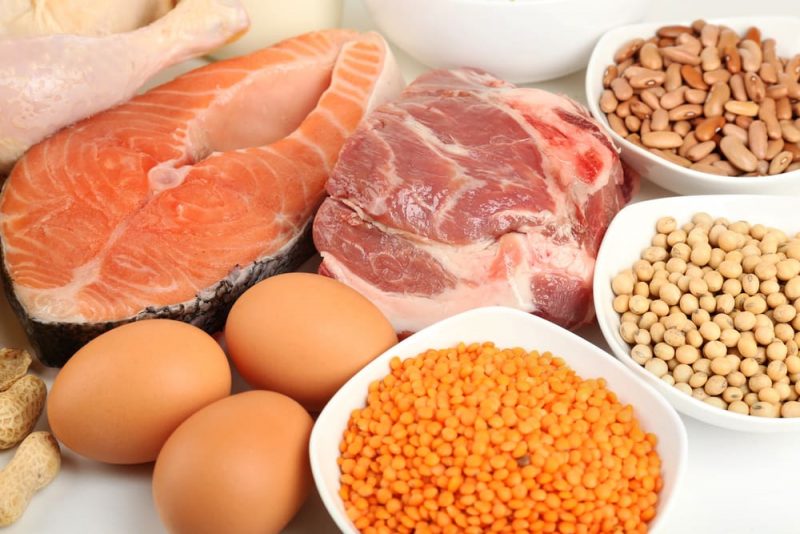