A vector is a mathematical tool, generally used in geometry and physics, that allows to carry out calculations and operations.

In physics, a vector is a line segment in space that has modulus (also called length) and direction (or orientation). Vectors are graphed with an arrow and help describe vector quantities.

Vector quantities are represented through a vector because they cannot be determined by a single real number, but it is necessary to know its direction and sense. For example: speed, displacement. This distinguishes them from scalar quantities, which only require a number and a certain unit of measure to be defined, for example: pressure, volume, temperature.

In mathematics, vectors are the elements of a vector space. This notion is more abstract, since in many vector spaces the vector cannot be defined from module and direction, for example: vectors in infinite-dimensional spaces. The representation used to represent a vector in a space of “n” dimensions is: v= (a1, a2, a3,… an)

Vectors can be added or subtracted from each other to give rise to a new resultant vector, or multiplied by a scalar, vector, or mixed value.

Elements of a vector

To fully define a vector, you must specify three characteristics that distinguish one vector from another:

Different classes of vectors can be distinguished according to the characteristics they present and the relationship they have with other vectors:

Vectors are widely used in many areas of everyday life because they allow us to know magnitudes and represent them based on their module, meaning and direction.

They are usually used to:

Vectors in two and three dimensions

In the case of a two-dimensional space, any vector can be defined as: v = (vx, vY). The terms in parentheses are the coordinates on the “x” and “y” axes.

On the other hand, in a three-dimensional space, a vector is defined as: v = (vx, vY, vz). One more coordinate is added to indicate the coordinate on the “z” axis.

Vectors are generally represented using a two- or three-dimensional plane.

Examples of vector quantities in physics

Examples of vectors in mathematics 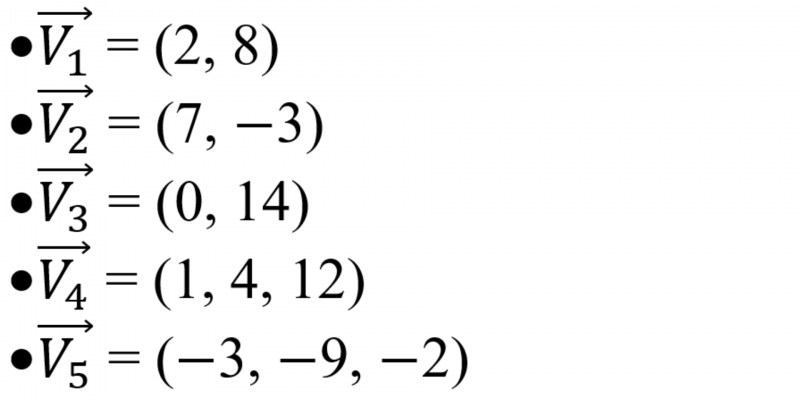