The wet jungle It is a type of ecosystem with a great variety of flora and fauna, which is characterized by having a warm and rainy climate throughout the year.

The humid forest occupies less than 7% of the planet’s surface, but it contains approximately two thirds of all known animal and plant species.

The climate of the humid forest is hot and humid, which allows the vegetation to grow considerably in size and variety of species. Rainfall is continuous throughout the year and reaches 2000 mm per year.

Temperatures in this type of biome are usually above 18° C and show very little variation. The average annual temperature is between 25° C and 27° C.

This turns the rain forest into an ecosystem with a single season throughout the year. Generally, the soil is poor because the rain washes away the nutrients in a process known as “ferralitization”. 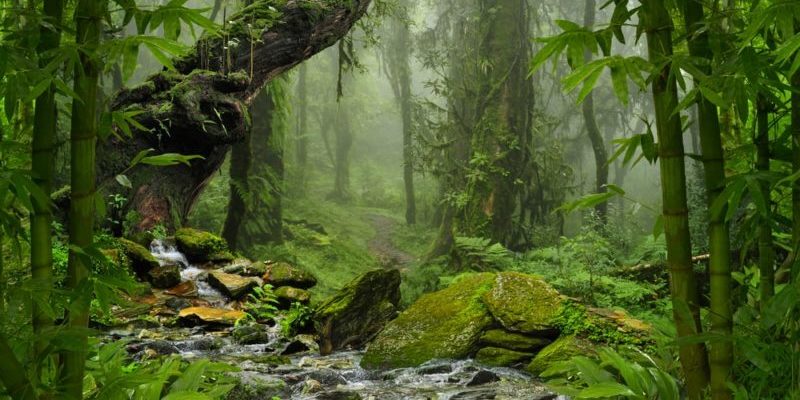 Strata of the humid forest

Within the jungle there are different strata or layers formed by different types of vegetation at different heights. They usually differ in:

The jungle is divided into different layers or strata among which its flora and fauna are distributed. The largest trees seek sunlight, so they have long, straight stems. Most of the plants and trees in the rainforest keep their leaves throughout the year. In humid jungles like the Mexican jungle, you can find trees like: the mahogany, kapok, red cedar.

Beneath this extensive vegetation grow orchids, ferns, mosses, lichens, lianas and bromeliads. There are also shorter trees such as cocoa, cocoa rosita, soursop, rubberwood and cork.

Due to its rich flora and climatic conditions, the fauna of the humid forest is also abundant and varied and is distributed among all the layers of the forest. The greatest variety and quantity of animals is found among invertebrates: insects, ants, worms, spiders, beetles.

Mammals such as monkeys, anteaters and raccoons also inhabit this ecosystem; birds, among which the solitary eagle, the royal toucan and the green parakeet stand out; and a great variety of reptiles and amphibians such as boas, frogs and salamanders.